Of all the functional groups investigated in A Level Chemistry, amines are the trickiest to name.  This is because there are many naming conventions that can be used.  In this blog post I detail the three most common naming systems and discuss their relative merits.

All the exam boards seem to favour the “alkylamine” system of naming amines.  This is the system that you will probably see in text books and on exam paper questions.  Examples include methylamine (CH3NH2), ethylamine (CH3CH2NH2) and propylamine (CH3CH2CH2NH2) and so on.  This is the old, traditional method for naming them but not the preferred IUPAC system.  The IUPAC names for the corresponding molecules would be methanamine, ethanamine, propan-1-amine.  The third way is aminomethane, aminoethane, 1-aminopropane which, in terms of nomenclature, treats amines like halogenoalkanes.

So which is best?  I guess the obvious answer is that we should stick close to the convention that the exam board favours.  The drawback is that it can get a bit confusing when the functional group moves or you have secondary, tertiary or branched amines.

Incidentally, for amines of this type containing three or more carbon atoms, the traditional system uses an “n-” before the name.

Straight chain primary amines with the amino group at the end of the chain are summarised in the following table.

This is where I think it is better to move away from the traditional naming system.  For example, if I was to ask you to draw propan-2-amine then I would expect most A Level Chemistry students to be able to work out that this is a three carbon molecule with an amino group on the middle carbon atom i.e. CH3CH(NH2)CH3.  If you can name alcohols confidently then this won’t present a problem.  You could instead call it 2-aminopropane which also makes sense if you use halogenoalkanes as a frame of reference.

However, using the traditional naming system for this molecule would conjure up the somewhat archaic isopropylamine.  So it must stand to reason that the molecule that IUPAC would prefer to call butan-2-amine (CH3CH(NH2)CH2CH3) must have the old name isobutylamine?  I’m afraid not.  Isobutylamine would be the equivalent to 2-methylpropan-1-amine (CH3CH(CH3)CH2NH2).  The traditional name for butan-2-amine is sec-butylamine or 1-methylpropylamine (which could be easily confused with methylpropylamine, you will see why in the next section).

It gets worse.  We know where we stand with pentan-2-amine and pentan-3-amine (or 2-aminopentane and 3-aminopentane if you prefer).  But what about their traditional analogues?  1-methyl-n-butylamine and 1-ethyl-n-propylamine, often written without the “-n-“.  This is a personal opinion, but I think I see why IUPAC prefer their method.  It seems much clearer to me.

The straight chain and branched isomers of six carbon atom containing amines are summarised in the following table.  As you can see, the traditional names for more complicated branched molecules start to get a bit ridiculous whereas the IUPAC preferred names seem somewhat more rational. 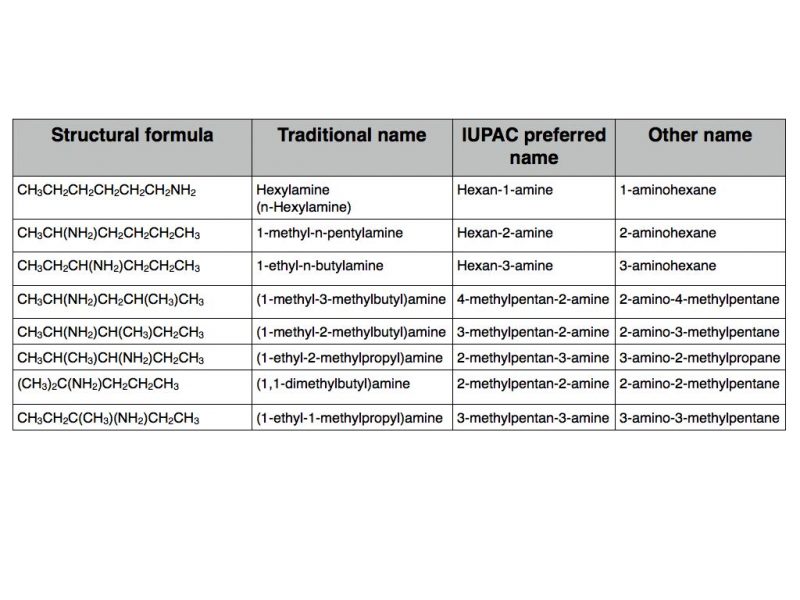 Secondary amines have two carbon atoms attached to nitrogen and tertiary have three carbon atoms attached to nitrogen.  In these cases, the traditional method is perhaps a little simpler where the alkyl groups are straight chains, simply name them in alphabetical order using di and tri if there is more than one of the same type.  Having said this, it could be easy to mistake methylpropylamine for 1-methylpropylamine.  The IUPAC system treats the shorter alkyl group as a substituent located on position “N” with the remainder of the name based upon what it would be without this substituent. To my knowledge there are no equivalent names that treat the amino group as a substituent.  So if if you prefer the “amino” convention then you will have to change to one of the other systems when naming a secondary or tertiary amine. 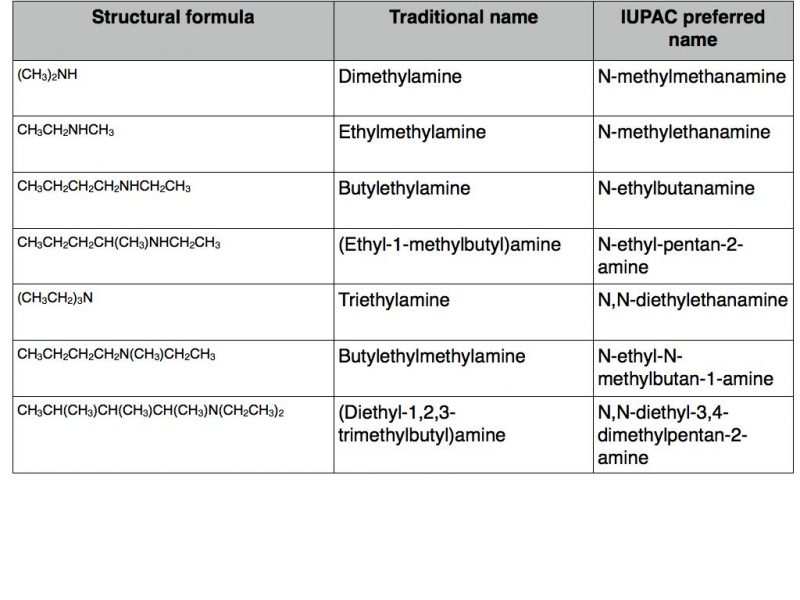 In my next blog post I will go through cyclic amines, aromatic amines and molecules containing the amino group in addition to another functional group.