You may recall from your GCSE studies that oxidation is loss of electrons and reduction is gain of electrons (OILRIG).  You will also have learned how to write and balance simple half-equations to show oxidation and reduction processes.  In addition, chemical reactions where one chemical species is oxidised and another reduced is an example of a redox reaction.

A knowledge of oxidation states will allow you to determine whether a chemical species is being oxidised or reduced and the extent of the oxidation or reduction.

What is oxidation state

All atoms, whether they are present in elements, compounds, ions or molecular ions have an oxidation state.  It takes the form of a number that can be positive, negative or zero.  If it is positive or negative, the sign must be clearly indicated. In simplistic terms, the number is determined by how tightly it is holding on to its electrons.  It assumes that all chemical bonds are ionic, except for chemical bonds between atoms of the same element.

Elements that are treated as monatomic in chemical equations are not chemically bonded to other elements for the purposes of  oxidation state.  They have neither lost nor gained electrons and are not sharing them with other atoms.  Therefore, the atoms in monatomic elements have an oxidation state of zero.

Diatomic elements exist as molecules consisting of two atoms covalently bonded to each other.  As there is no difference in electronegativity between the two atoms, the shared pair of electrons is shared equally between the two atoms.  Since neither atom has lost or gained electrons all the atoms in a diatomic molecule of an element have the oxidation state zero.

Rules for determining oxidation state of atoms and ions in compounds

If you follow the rules listed below you should have no trouble determining the oxidation state of atoms and ions present in compounds. 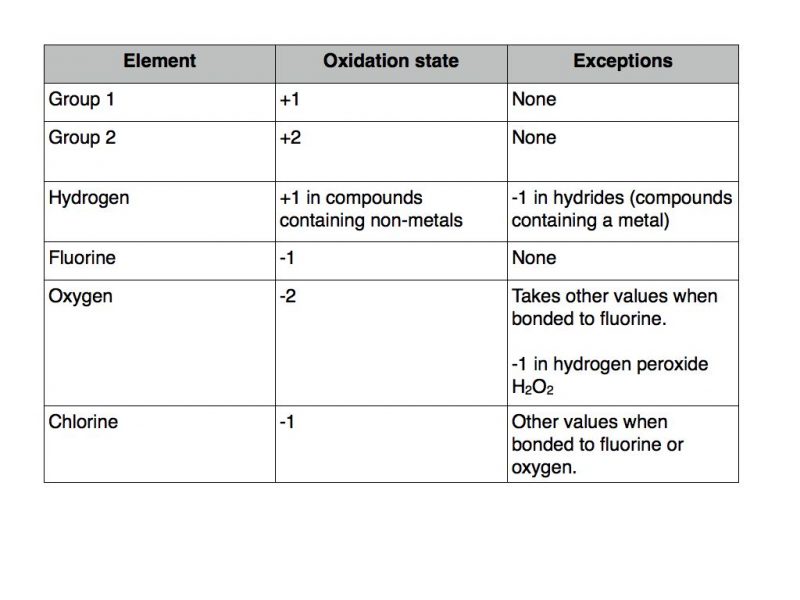